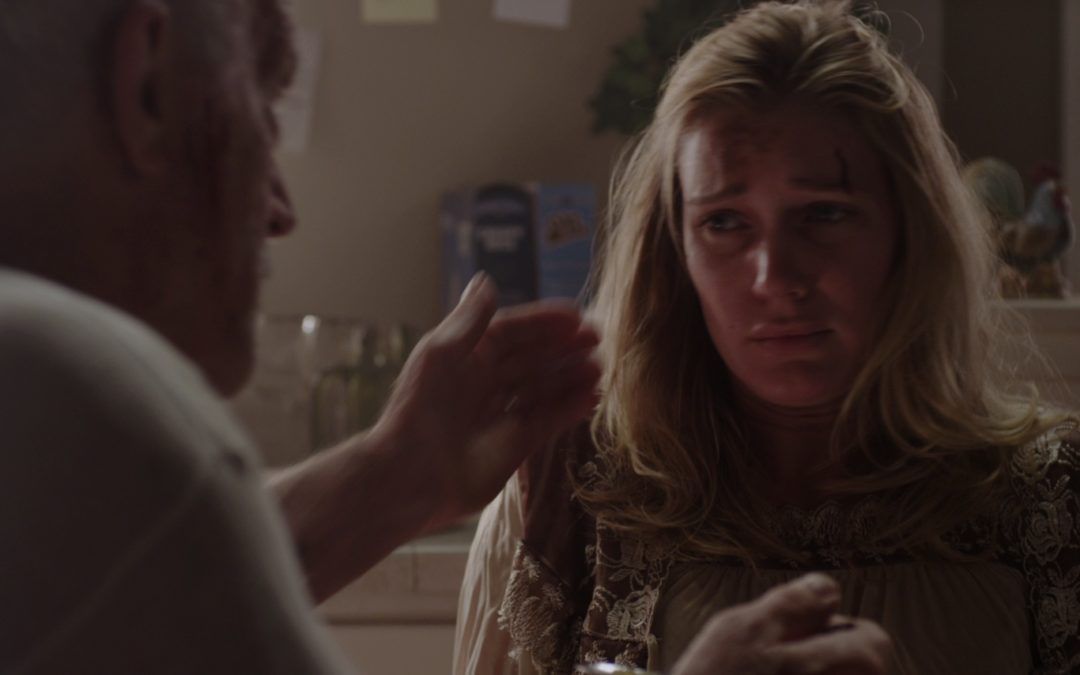 Welcome one and probably one to my very first blog post. I know, I figured out how to turn on the tablet and everything all by myself and thought I may as well write about some things before I break it! Those who know me are aware that I suffer from two conditions: Cinephilia and being Technology Challenged so why not combine the two and put them to some use while also entertaining, I hope. Here I am, proof that ANYONE can do what they love and go from there. Film Festivals, Conventions, Events, Pre-screenings, Celebs, Film Reviews and more……trying everything and telling you all about it. So to keep my first post short, I thought I would begin with my favorite shorts of 2016. And to keep it even shorter, I will do my favorite 5 instead of 10 so here we go.

The Stylist tells the story of Claire, a hairstylist working on her last client of the night and the dark turn it takes. From the first image of Claire daydreaming at the ceiling as she slowly spins in her stylist chair to that last emotional scene, Najarra Townsend captures your attention and breath with her performance and leaves you wanting to see and know more about what makes Claire who she is and what has led to her to this place. A mesmerizing score by Nicholas Elert, great cinematography by Robert Patrick Stern, editing by John Pata and production design by Sarah Sharp elevate the filmgoing experience. If a feature is to be made of any of the shorts listed, I can not only see this being made into one but also sequels to follow. Currently streaming on Shudder.

The Light Thief reminds me of It Follows with its subject matter and The Hunger with its eerie beauty. After a woman becomes involved with a man who takes her essence of love, how does it change her and how can she regain the light that was stolen from her? Daoud does a beautiful job giving equal attention to the character development of our dual villains and heroine, enough to care or despise them while also suprising you when you think you know everything about them. Phenomenal direction by Eva Daoud with excellent art direction by Marta Gutierrez-Abad, it also has one of the most beautiful production designs on a film, short or otherwise. I truly look forward to what Daoud will put forth to entertain and elevate us all. I believe it is currently streaming on Amazon Prime.

Hard Broads kept me laughing long after it had ended with 4 others shorts still to view. The film immediately made me want to be best friends with director/writer/actress Mindy Bledsoe and her leading ladies or know I would be in good company if I found a dead male stripper in the trunk of my car. One of the only films last year, short or feature, that passed the Bechdel Test, when 3 female friends are brought back together to help one with a corpse, an evening of hilarious adventures go down. Fantastic physical comedy by all the ladies and Susan Kirton who says so much without saying a word. A look at female friendship and A Weekend at Bernie’s for the millenium with more pot and laughs, the tag line says it all: Three Women. One Corpse. Stupid Plan. A funny, funny gory good time I am lucky enough to own.

#2 Light up the Night – Directors Caspar Newbolt and Matt Sundin

Short or 15 minute video, I’m not sure if it was the performance of James Ransone, the music of the Protomen or some weird Mr. Roboto girl crush thing I never knew I had that drew me to this Big Brother musical fantasy but I watched it, forwared it, spoke about it and then watched it again within 30 minutes. While it has a Repo! The Genetic Opera look to it, that will be the only comparison I will make about this story in a 1984 style setting with the robotic law enforcement and mounting tensions of the citizens ready to explode during a concert by the Protomen whose music narrates the struggle between the two. A Streets of Fire flashback came to mind with the city that sees no light, steam and violence in the streets and a soundtrack that makes it all work.I really like Streets of Fire so I think this is a big compliment. Now on YouTube for your viewing pleasure.

So there were 2 instances last year where I needed to walk out of what I was watching. The first instance for exiting was Phantasm Ravager in the theater during a horror film festival. The second was during the Etheria 2016 tour lineup at Days of the Dead Chicago after watching this jewel. While the reason for the first was because it was absolutely horrendous, the latter left me so emotional I had to skip the remaining short films to compose myself and try not to ugly cry while making my exit. This film is one of the best pieces of art I have seen all year. When a young woman is held hostage by an older man, played by the incredible Lance Henriksen, you are taken on her terrifying journey trying to break free from her captor, only to find out the truth of why she is actually there. My emotional response took me by suprise at what the story truly reveals which I can only imagine was a peronal experience for writer Carly Street that is becoming far too relatable for many others. Writing about it 2 months later after only one viewing and I am still fighting back tears. Even the tagline: He promised her…no matter what, is haunting. Suspense, Drama, Horror….however you categorize it, they are all true. Prepare to view greatness and bring some tissues, you’ll need them.

Best Actress in a Short Film

Best Actor in a Short Film

I have to acknowledge and thank Stacy Pippi for her excellent judgement as 4 of the 5 films are from the Etheria Film Festival or Tour Selections and I would probably not have had the opportunity to view them if not for her. Enjoy these at your leisure friends and let me know if there are any others you recommend. If you see me at the movies, I’ll be the blonde in front.